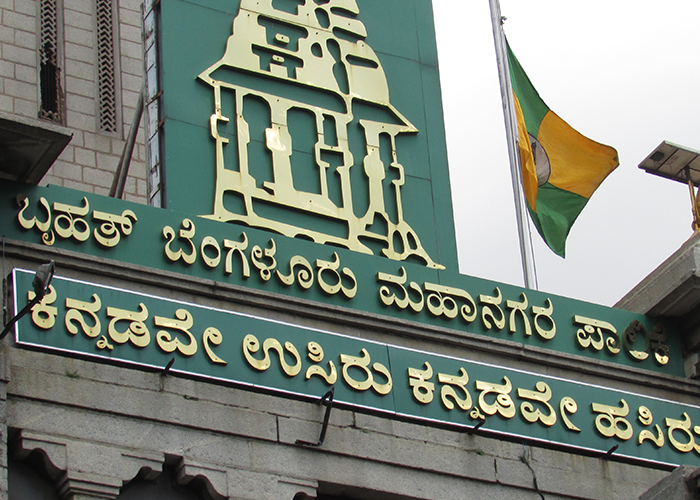 We are BBMP Trade License Consultants in Bangalore. If you looking for this service please call us..

The Bruhat Bengaluru Mahanagara Palike (BBMP), is the administrative body responsible for the civic and infrastructural assets of the Greater Bangalore metropolitan area.

The BBMP represents the third level of government, (the Central government and State Government being the first two levels). Bruhat Bangalore Mahanagara Palike is run by a city council. The city council comprises elected representatives, called "corporators", one from each of the wards (localities) of the city. Elections to the council are held once every five years, with results being decided by popular vote. Members contesting elections to council represent one of more of the state's political parties. First elections to the newly created body was held on 28 March 2010, after the delays due to delimitation of wards and finalising voter lists.

BBMP is divided into ten zones, for the ease of administration each administered by a Zonal Commissioner:

Every zone has a Joint Commissioner, who is answerable to the BBMP commissioner. The decentralisation hasn't been very effective in addressing the problems in administration. The end of 2013 saw discussions in various circles about dividing BBMP into more parts.

How to get a BBMP Trade License in Bangalore?

Section 353(3) of Karnataka Municipal Corporations Act, 1976 of the Act mentions that the owner or occupier of every place for the use of which for any purpose a license is required shall apply to the Commissioner for such license not less than 30 days before the place is used for such purpose.

Which are the trades require Trade license ?

The list of trades that are statutorily obliged to apply and obtained license are specified under schedule X of the Karnataka Municipal Corporations Act, 1976. The list is attached as Annexure A.

What Happens if a trades are done without a Trade License ?

It is mandatory under the law to apply and obtain trade license from the Jurisdiction Health Officer. If one contravenes then, with a view to protect public health, the Jurisdiction health officer or Any officer authorised by the commissioner can summarily close or seal the trade premise until such time license is obtained.

When does one apply for renewal of Trade License ?

What happens if I apply later than the last day of February each year ?

i) Application for renewal received between 1st March and 31st March will be done only after the inspection of the Trade premises besides a penalty of 25 percent of the license fee. As mentioned earlier for the current year renewal 2015-2016 this condition relaxed as mentioned in Section (iii) below.

ii) Application received after 1st April will be done only after inspection of trade premises besides the levy of penalty equal to the fee prescribed.

What is the optional scheme for renewal of Trade License ?

'Suvarna Arogya Paravanagi' is an optional scheme for renewal of Trade License. If you submit the renewal application between 9 30 am to 1 30 pm from 15th of March to 31st March Every Year at the "Trade License Renewal Clinics" (TLRC) along with an affidavit to the effect that you are continuing the trade and will abide to all trade regulation your trade license will be automatically renewed and issued to you on the next working day between 9-30 am 1-30 pm at the same counter where you applied.

Where do I have to go to apply for renewal of Trade License under the scheme Suvarna Arogya Paravanagi?

For the convenience these optional TLRC will be opened at all business areas in the city from the 15th March to 31st March every year. You can get the list of centers opened in the Trade Handbook brought out for the purpose.

When will the license expire?

The licence issued expires on 31st March every year. The application for renewal needs to be done before the last day of February each year. For trade renewal license, an affidavit on a Rs.100/- stamp paper needs to be filed. This affidavit shall state that trade will continue to be carried on as per regulations and other laws in force.

After 1st April where do I have to apply for the renewal ?

After 1st April you will have to come to the zonal office mentioned in Annexure c and file for renewal. The delegated Staff will inspect the premises before renewing the license.Since the delegated stall of Bruhat Bengaluru Mahanagara Palike [BBMP] will conduct the inspection of the place for compliance to law.its also required to file and affidavit as is under the optional scheme [i.e Suvarna Arogya Paravanagi ]available until March 31st.

Will there be Inspection of the Trade premises before the issue or renewal of the trade license ?

Normally there will not be an inspection of the trade premises for renewal during this optional period unless warrant and directed by the commissioner or the delegated authority. However designated staff of Bengaluru Mahanagara Palike will be carry out.

Where to find us